Rome’s attractions date me back to Historical Ancient Times

After spending an adventurous week in Paris, it was time to visit one of the greatest city in Europe – Rome. This city is one of the most beautiful cities not just in Europe but probably the entire world. A city packed with thousands of years of art and ancient history, tempting shopping arcades to endless list of attractions. The city of Rome with an irresistible charm has been on my dream to-do list for decades.

With its rich ancient history and culture intertwined with today’s modern Rome I was bound for confusion but at the same time with great exhilaration of seeing and feeling this great city. Flying over Rome, I was totally amazed and at the same time mesmerised with what I have seen from above and land as I have made my way to the hotel. This city is certainly vast and complex city that is both historic and modern at the same time.

Rome was formerly the capital of the Roman Empire but today it is the government seat and the capital of Italy. This vibrant city of Rome is best known for housing ancient Roman structures and the Vatican City. It has endured for more than 2,500 years as an important centre for culture, power and religion.

The city of Rome has the most ancient attractions like the Colosseum, the Forum of Augustus, Capitoline Hill and the Roman Forum. Further away on the outskirts of the centre is Old Rome which features the Pantheon, stunning cathedrals, plazas and Renaissance architecture. The Vatican is also well known for St. Peter’s Basilica, the Apostolic Palace and Sistine Chapel. With so much Monuments and museums to see, such as the Vatican Museums and the Colosseum which are among the world’s most visited tourist destinations. These two locations have millions of tourists visiting the sites annually. Yes, there is so much to see and do in Rome and would take months or years to see it all. I am here for a treat in history and the list is endless.

A Taste of Ancient Rome

No amount of time can be ever enough but my mission was to be able and see and explore as much as possible and at the same time making enough time to sit down and enjoy Rome by night with a scrumptious meal and a glass of exotic Italian wine. One of the most significant site that I wanted to see in Rome which has been on my mind in planning my time is Rome was to visit the Colosseum.

My first day began in Rome with my “Italiano” breakfast – an “expresso and a pastry” before making my way to the first sight of the day – Colosseum. The Colosseum, also known as the Flavian Amphitheatre is an over an oval amphitheatre build of travertine, tuff and brick-face concrete.  Dating back in history, it was used for gladiatorial contests and public spectacles. Today, it is protected and a very popular site for both the tourists and locals. Although, it is partially ruined because of damaged caused by earthquakes, stone-robbers and other unexpected natural disasters, the Colosseum is still an iconic symbol of Imperial Rome. It is one of the Rome’s most popular tourist attractions and it also has links to the Roman Catholic Church. It holds many outdoor style seated concerts for outdoor orchestra, singing concerts by world famous tenors and many more.

Yes, to be standing there inside this old ancient ruined arena certainly took be back in time visualising what it was like then. Been inside the heart of the Colosseum, I now can see why Colosseum continues to be the leading attraction for tourists from all over the world. It is just absolutely breathtaking to see it in person and standing there gives you a different perspective on how you view and understand history. 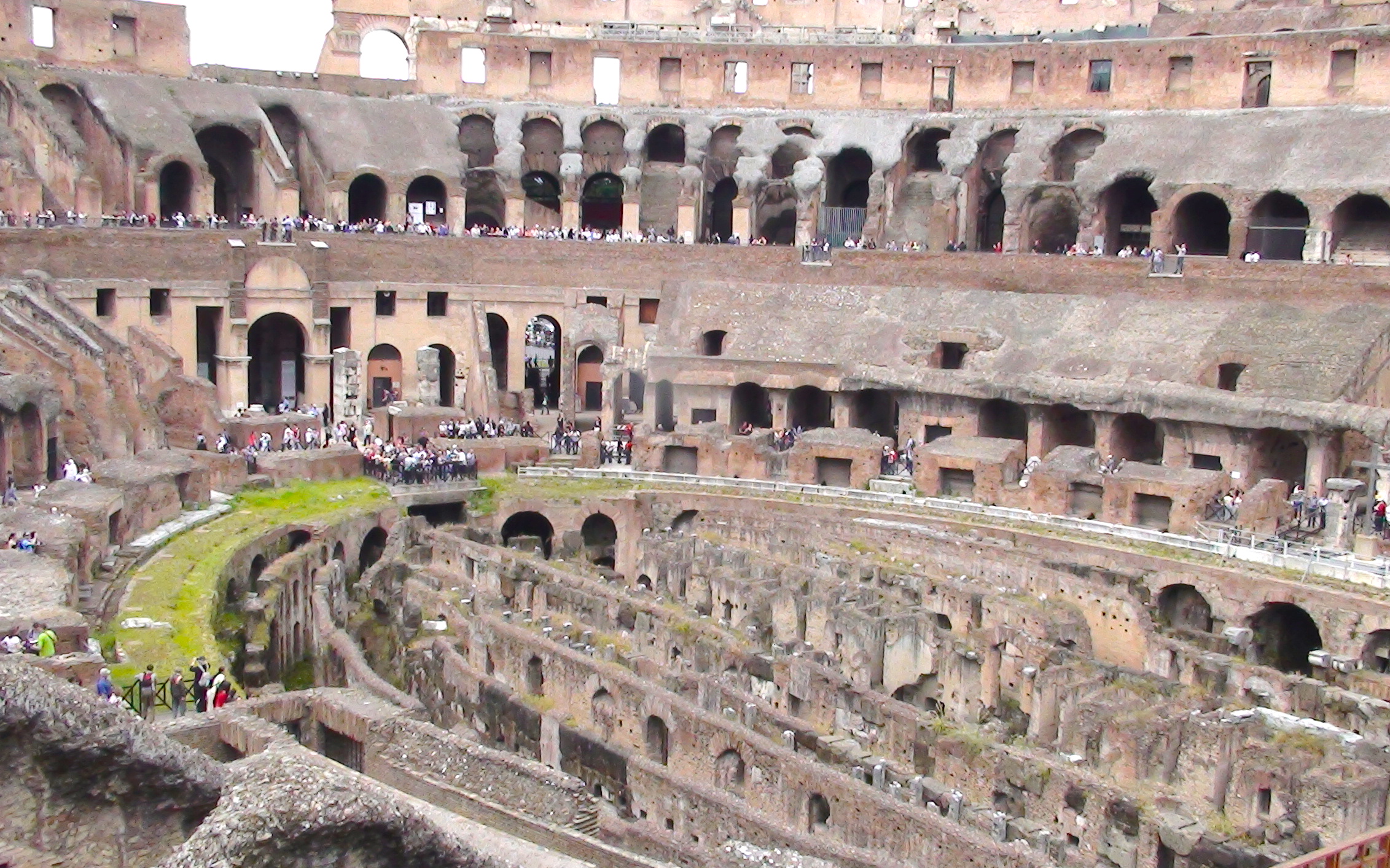 On my second day, I had the tour of the Vatican city. A visit to the Vatican city should be one of the first on the list to do in Rome for any visitors. This is a city built within a city and it is the world’s smallest state which fits snuggly in the centre of Rome, consisting of the St. Peter’s Square and Basilica, the Sistine Chapel and the Vatican museum. It is also the home of the Pope and about eight hundred other souls, mostly clergy and Swiss Guards. Also, it is home to one of the most famous art collections in the world, as well as an enviable library.

The day involves a visit to the Vatican museum, the Sistine Chapel, St. Peter’s Basilica and you don’t need to be religious to visit this little country and neither do you require a visa – This means no border formalities, no luggage searches, no sour and dour looking custom officials either. You simply cross the white line separating St. Peter’s Square from the rest of Rome and you’re there. There are no hostels or hotels in the Vatican City, so no-one can’t spend the night there, unless of course if you’re invited by the Pope. Neither is there much of a public transport, everything is basically in walking distance.

Prior to entering the Vatican city, I was required to go through a very sophisticated and tightly monitored double security system. Once inside, it was unbelievably amazing. Strolling through this incredible cobblestone streets with centuries of history behind them was just fascinating. There are wonders of religious art and architecture around every corner, the flowering of a European culture formed largely by Catholicism, and its view of the beauty of creation and the dignity of man. If your lucky, you will be able to see monsignors and bishops and cardinals, dashing about their clerical robes flying, the occasional red hat bobbing along. Yes, most importantly, I felt there is the presence of the Holy Father, the Vicar of Christ on earth. It is incredible that you feel the sense of something when entering a scared site or building.

Finally, I made it inside the Sistine Chapel, which is probably the most famous site in Vatican City and St. Peter’s Basilica, with more frescoes, a magnificent dome and many more. Sistine Chapel is famed for its incredible frescoes on the ceiling painted by famous Michelangelo.

As I made my way outside, I then headed over to St. Peter’s Basilica – regarded as the world’s largest church and one of the holiest. To go there, you have to dress conservatively – meaning that your shoulders and legs have to be covered at all times for both men and women. The entrance to the church was free. Since I was racing against time, I didn’t had the chance to climb the magnificent cupola, at a cost. You can climb the entire 551 steps to the dome or take a lift that will leave you with only 320 steps to the dome. It is such a fascinating art of work

As I stood there, looking at St. Peter’s Square, I just could just visualise thousands and thousands of people gathering at this very place for their annual pilgrimage in Catholic’s Holly calendar year. In exploring this tiny territory, I have found out that one-day is not enough to visit this world’s smallest city.

After an eventful morning, it was time for a quick late lunch break at one of the many restaurants, making room for a gelato. I made my way back to the city to view the night life of Rome with a nice dinner at a local restaurant relaxing and seeing the crowd go by.

To spend few days in one of the most beautiful cities that I have come across, not just in Europe but probably the entire world is something that I will take home with flashbacks in years to come. Rome is a city where it is packed with thousands of years of art and history, a plethora of wining and dining hub but also the home of one of the world’s biggest religion – Catholicism. Rome has it all on every dreamers to-do list and it has too many incredible sights to see and experience. From personal perspective: In visiting some of this historical sites not only brought enjoyment to me personally but I have profoundly learnt, discover and explore what it was like during those ancient times. It has truly opened my eyes, ways of thinking and understanding. The knowledge I have gained through travelling is just been phenomenal. This is why I love about travelling because it certainly opens up our minds.

This site uses Akismet to reduce spam. Learn how your comment data is processed.